I’m exercising my nationality in this post with a discussion on the upcoming General Election which is dominating the British press concerning the contentious, and very ambiguous, proposals of Britain’s politicians.

The 2015 General election is a political minefield, and is the first election in Britain’s recent history to defect from the bipolar, Labour/Conservative contest to include a greater number of fringe parties i.e the Greens, UKIP, SNP etc. This is my first opportunity to vote at a national level, but I’m sure I speak on behalf of fellow students and young adults when describing the undeniable difficulty of politically aligning yourself with the parties of Britain today. Voting is a principle I value strongly, and living within a nation with democratic roots stretching back to the seventeenth century, it is something I will continue to do out of national respect. It is a right enjoyed by British citizens but commonly denied in other regions of the world, and for this reason we should exploit this freedom and opportunity to its fullest. 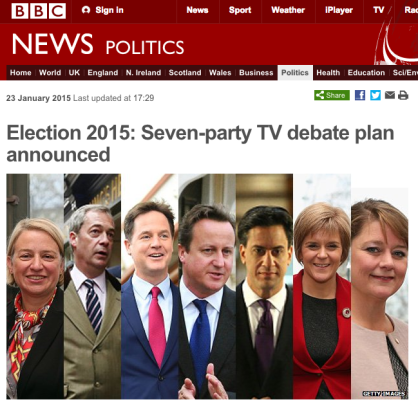 The problem we have in 2015, however, is that the difficulty of exercising our vote is increasingly difficult when we face a spectrum of elitist individuals whose policies overlap, intertwine, and criss cross across the front pages of our newspapers, without really telling us a single thing. I pride myself in following the news daily, however, I could not write you a ten point programme for either the Conservatives or Labour on the definitive policies of this forthcoming General Election – which may I add is in 28 days. As a man obsessed with time and being punctual, I am feeling very restless.

How are the  younger generations supposed to differentiate between these two key players which are so close to political centre, yet seem to be deliberately engaged in a game of tit-for-tat, rather than educating us on what the f#@k they are going to bring to our country? If you have ever watched an episode of Prime Ministers Questions and laid witness to the schoolboy jeers, you would accept my bold assertion as gospel truth.

The fringe parties have, in my opinion, given some charisma to British politics and with the likes of UKIP, have certainly added some controversy; their evolution into popular players in the political establishment and their intrusion into Conservative/Labour strongholds have absolutely given British politics the long awaited jerk that it needed. These fringe parties have been much more successful in outlining their agenda, and their very positioning on the periphery of this bipolar contest has enabled them to do so; it is an uncontested fact that Sturgeon wants to kick Westminster’s nose out of Scottish affairs and that Farage wants GB out of the EU – UKIP’s manifesto could be simplified further: anti- immigration, anti-EU.

I have already stressed the initial problem with voting in 2015 regarding the ambiguous and dubious scent given off every time Ed or David deliver their ‘proposals’ for Britain’s future. The additional difficulty is whether a ‘fringe vote is a wasted vote’ – “will the Greens or UKIP realistically win a majority for this election or am I simply voting for another five years of coalition?”

My argument is this: whoever/however you choose to vote, ensure that you can confidently justify that decision to any randomer that wishes to challenge  your decision. Don’t vote like a sheep – don’t vote Green because all the trendy peers in your seminar group think that their renewable energy policy will ‘solve the world’; nor should you vote UKIP just because the lads down the local, born and confined to their town, fear the ‘foreign’ cultures threatening Britain and are therefore placing themselves behind the messianic figure of Nigel Farage.

Be realistic and inquisitive, and try to make some sense out of the careerist-jumble that the politicians of today proclaim. But more importantly, make an independent decision and try to make a decision suitable for you. Admittedly, I am singing from the same hymn sheet of those who are confused over how to make the best use of their vote, and I am optimistically waiting for an unequivocal set of proposals by the players of our two major parties which will straighten me out.

More importantly, do not not vote – this is simply implausible.

Follow A World Affair on WordPress.com
Culture and its uses as testimony

'Culture and its Uses as Testimony': an international, AHRC-funded Research Network

To Put Mosul on the Global Map

honest essays about growing up, faith + loving others well.

Thoughts on history, the Cold War and Germany

Resources & Ramblings from an NQT

Ali In The Field

Letters Home From The Field

The Historical Diaries
The Transient Photographer

The Journal Of An Always On The Move Photographer

Fighting fascism one fact at a time

A daily selection of the best content published on WordPress, collected for you by humans who love to read.